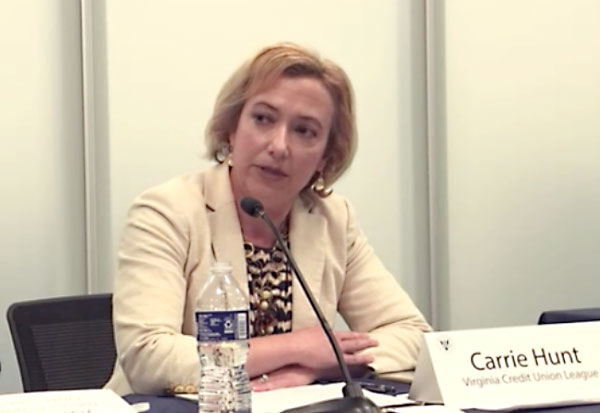 League President/CEO Carrie Hunt (pictured) testified Wednesday during an NCUA hearing on its 2023-2024 budget and the agency’s justification for its proposed expenditures.

“Credit unions bear the cost for the NCUA’s budget,” Hunt notes. “Transparency on the part of the agency in how they spend credit unions’ funds is important. However, the more important part of that equation is holding the agency accountable to its dual mission as a regulator and insurer and an important way we do that is to question the agency’s strategic priorities, its budget priorities, and its expenditures.”

During her testimony, Hunt raised several issues for the Board’s consideration, including the agency’s focus on the examination and supervision of large credit unions, which is driving much of the agency’s uptick in fulltime positions.

Hunt noted her concern that the agency is equating size with complexity, which may not always be the case. This focus on large credit union examination, for example, drives the agency’s proposed hiring for specialized positions, such as BSA/AML and cybersecurity specialists.

She noted, too, that the agency’s budget has grown by $100 million during the past decade, even as the number of credit unions has declined and their core business remains unchanged.

Hunt also noted the cybersecurity issues the agency is addressing internally and within the credit union space, but she challenged the Board to lobby Congress to address issues related to fraud and data breaches. For example, merchants are not held to the same high standard as credit unions with regard to data security. But the fraud that follows a data breach at a merchant could lead to fraud losses and costs at a credit union, which is of keen interest to NCUA.

Hunt also asked the agency to carefully consider an appropriate metric that measures the value of credit unions’ “investment” in NCUA and whether that “investment” is translating into real-world, marketshare gains for the nation’s credit unions.