I want to talk about Dolly Parton and overdraft protection. Yes, that Dolly Parton! You see, Dolly is having a moment and is making news. She recently released a book she co-wrote about a young musician trying to make it -- available at a bookstore and in an airport near you! (She also has a companion album and virtual book tour). 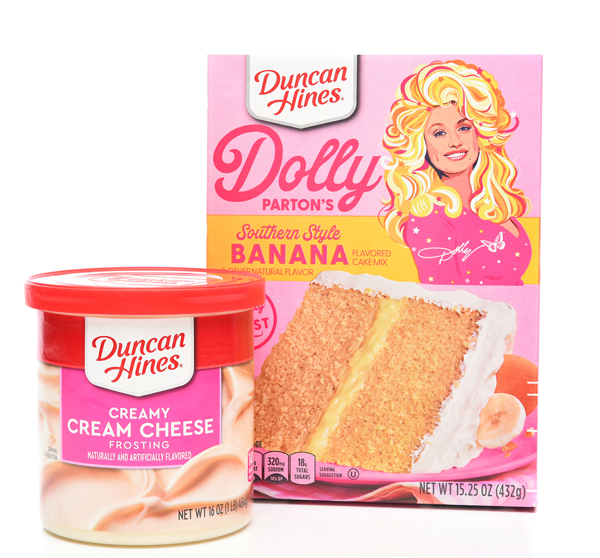 She is also collaborating with Duncan Hines to make Southern-inspired cakes (they sold out just weeks after their January debut, even though the reviews weren’t kind, with some suggesting they tasted as artificial as her ... nails).

Recently, she politely declined to be on the ballot for the Rock and Roll Hall of Fame, indicating that it … well, it simply wasn’t her thing. Take a hard look, however, and you’re struck by the fact Dolly has been having a moment for a long, long time. She is a great example of someone who stayed true to her core “book of business,” but mastered the art and science of innovation within that “book.”

Dolly started out with nothing, made a name for herself and then began to give back. Financial literacy is her main go-to. She started out giving books to poor Tennessee schools. Heck, she rebuilt an entire Tennessee town when it was decimated by fires!

What her experience taught her and what she grew to realize was that she could be more successful and reach more people if she promoted herself in different ways. Hence the cooking (which she loves to do!) and the book and album (she says she has always wanted to write one!).

Dolly is successful because she has stayed true to her brand. I believe credit unions will continue to be successful if they stay true to themselves, but that does not mean that credit unions should not modernize and innovate. Just like Dolly, credit unions need to be able to operate in ways which, on the surface, may not seem very “credit union-like,” but in fact, really are.

Singing from the same song sheet.
I have been thinking a lot about overdraft protection and the current debate surrounding it. I admit, I was not happy with the hearing just held on overdraft. In fact, I delayed writing this diary entry to cool down a bit.

The hearing last week before the House Financial Services Committee featured a credit union that testified about how they reduced their overdraft and NSF fees to $5 per occurrence, along with other strategies including a fee-free account.

I will not pick apart the entire testimony, but I encourage you to read it because this is the message our policymakers heard. This is forever in the public record. Not every credit union can or should take the same approach. Of note, the credit union in question is approaching $5 billion in assets.

CUNA and NAFCU each filed a letter for the record, along with a joint letter. Those letters said the right things, overall. The Virginia Credit Union League submitted a separate letter, as well. We filed our letter after the hearing because I felt it was vital we oppose unnecessary restrictions on overdraft or other programs. Unfortunately, the horse is out of the barn.

The credit union witness did not represent either national trade but only spoke for his credit union. But that really does not matter.

I’m told that the witness was proffered so that a worse witness would not be called. Rest assured, the “best-of-the-bad” is not my approach to advocacy. We must do better. If we can’t ensure a witness represents the interests of the vast majority of credit unions, then we need to find a way to convince HFSC leadership to skip a credit union witness altogether.

How can we do better? We need to keep messaging that credit unions have responsible programs and are not fleecing our members. We also need to keep messaging that all fees are not inherently evil. They are part of the cost of doing business. We need to keep the debate focused on the true bad actors -- the banks! (That’s right, staying on brand!) Their abuses are well documented, after all, and I worry that many in Congress are finding us guilty by association.

That said, I firmly believe we need to regularly re-examine our practices. Not because credit unions are doing anything wrong, but because we need to be nimble and active market participants.

The cake is baked.
The CFPB has their request out for comment on so-called "Junk Fees" and we are submitting comments for that, as well. At present, there are more than 38,000 comments. Yep, 38,000, with 146 involving credit unions in some way, shape or form. I have not read all 38,000, but I have read enough to get the flavor. The CFPB is looking for justification for additional disclosures on fees and is fishing to use its UDAAP authority to stop certain practices it alone deems as bad.

Reading between the lines.
The NCUA is, of course, doing its own work on overdraft. The NCUA had a webinar on Overdraft Protection and its future. Chairman Todd Harper stated Overdraft Protect Programs and their related fees are reaching an inflection point. His perspective was that owing to the changing landscape and consumer expectations, credit unions need to begin adjusting their revenue expectations related to fees earned by overdraft services. He stated that not only do credit unions face a relevance problem if they refuse to consider changes to their ODP Programs, they must also consider whether ODP programs align with the credit union mission and business structure -- as well as whether they align with the needs and expectations of members.

Chairman Harper noted that in 2019, US credit unions received over $2.4 million in revenue from OPD fees, a quarter of all fee income. He views this as a safety and soundness concern, arguing some credit unions have become overly reliant on ODP and other fee income. Because of this, the NCUA has implemented an ODP review as part of its 2022 examination priorities and he plans to use the information gathered for a more detailed review in 2023.

The webinar went on to explain that due to interest and loan revenue dropping over the last few decades, credit unions and banks began to rely more on fees to cover the difference. While interest and loan revenue may increase with the Fed raising interest rates, credit unions also need to look at their costs and services with the potential loss of fee income if unable to increase their Loan-to-Share in order to remain profitable.

Chairman Harper also noted that while ODP fees and their corresponding income to credit unions make up a quarter of all fee income, it is a very small number of members who bear most of that cost. From NCUA's review of ODP Programs, it was found that while a majority of credit union members sign up for ODP; 82% never use it; 16% use it only in rare emergencies (roughly 1-2 times per year), while less than 2% of members are frequent users with an average of more than 13 overdrafts a year.

The webinar went on to note from the research that it is "clear" ODP programs fill a need for some credit union members, but credit unions must look at new alternative approaches in addressing this need, approaches that align with the credit union mission and address equity and inclusion concerns.

NCUA cited the following examples of steps credit unions are taking to adjust their ODP Programs:

What I think Chairman Harper is missing is that credit unions are constantly looking at their overdraft programs and making changes to suit their members’ needs.

Chairman Harper is always stating he believes small credit unions serve an important niche and can reach the underserved. Yet, many small credit unions lack the resources to diversify into other avenues and business lines that more readily produce interest income. The importance of fee income needs to be part of a larger conversation. A discussion of fee income doesn’t begin and end with overdraft.

So, what can the NCUA do in response to overdraft programs? What can they do if you have a legal program? Well, the NCUA can downgrade you for “over-reliance” on fee income, if that is the case.

Potentially, they can ding you for unfair and deceptive practices, as well. I think it ironic that Chairman Harper raised the question of whether charging fees was within accordance with credit unions’ structure, when in fact, the cooperative nature of credit unions makes a stronger case for using overdraft protection than not.

Regardless, the market is slowly shifting and the CFPB and NCUA are fishing. If credit union programs get lumped in with big bank programs we will lose. The CFPB Credit Union Advisory Board met this week in conjunction with its bank counterpart. Director Rohit Chopra announced that he wants to ensure “relationship banking” continues in the era of digitization, while also noting he’s trained his sights on core processors. He is concerned about too much market control and inability of financial institutions to bargain effectively in their contracts.

At our Annual Meeting, Ignite, we will have more of a discussion on these issues. By the way, there’s still time to register for IGNITE. I look forward to seeing you there, so we can continue this discussion!