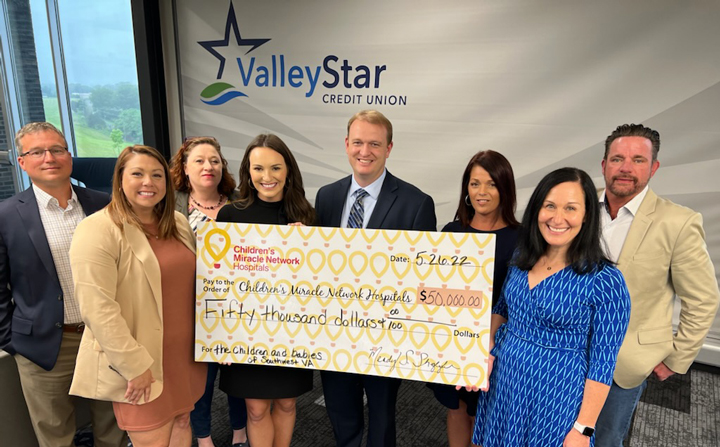 Martinsville, Virginia (May 27, 2022) – The ValleyStar RISE Foundation is thrilled to announce that this year’s Big Tee Off golf tournament raised $50,000 for Children’s Miracle Network after a two-year hiatus.

Over 30 businesses sponsored the tournament and 148 golfers were in attendance, playing either the morning or afternoon flight at Chatmoss Country Club in Martinsville, Virginia.

During the afternoon flight of the tournament, Scott Shytle with the Berry Elliott Realtors’ team made a hole-in-one on hole six which was designated for the $10,000 Hole-In-One Contest, sponsored by CUNA Mutual Group. Shytle teed-off with his 3 hybrid club in order to achieve the hole-in-one.

“After a two-year hiatus, it was awesome to have so much participation and support. Having a player win the Hole-in-One Contest was the icing on the cake,” said Greta Kidd, Executive Director of the ValleyStar RISE Foundation. “I’m elated that Scott is the recipient of our cash prize. His achievement is just another reason I would say this golf tournament was such a success!”

Kidd attributes the success of the tournament to the support of the sponsors, especially the golf tournament Premier Partner, AutosbyNelson.com, and Luncheon Sponsor, Member Wealth Management.
The golf tournament directly benefits Carilion Children’s Hospital located in Roanoke, Virginia. The funds will be used to bring lifesaving equipment to children and babies in Southwest Virginia.

Headquartered in Martinsville, Virginia, the ValleyStar RISE Foundation was formed in 2019 and recently received its 501c3 designation in January 2022. The foundation strives to bridge gaps in workforce development and mental and physical health by providing funding as well as volunteer opportunities for ValleyStar Credit Union’s team and board members to happily give their time and talent to support good work in the community. For more information, visit www.valleystar.org/golf.