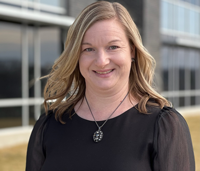 Martinsville, Virginia (January 10, 2022) – ValleyStar Credit Union announces that Angela Davis will join its executive team as the chief operations officer. She will lead teams at branch locations throughout Virginia, driving strategy, cultivating trust and building financial stability for our employees, communities, and members.

Angela, a Franklin County, Virginia native, started her career with ValleyStar Credit Union in 2000. Since then, she has mastered the art of member service and held many roles at the credit union and played a fundamental role in the rapid growth of ValleyStar. She collaborated to create the online account opening process for consumers and existing members, which now accounts for an average of 40% of ValleyStar member accounts.

“Angela Davis is a name well recognized by our team,” said Mike Warrell, ValleyStar CEO. “Her deep knowledge base of all facets of ValleyStar keeps her at the center of strategic conversations, while supporting multiple teams throughout the credit union. Angela truly embodies our mission, Employees First. Members Benefit.”

The credit union philosophy of “People Helping People” aligns with Angela’s passion for teaching and empowering those around her. She is an active participant in youth sports and has helped coach teams for the Franklin County Recreation Department. As a former athlete, she understands the importance of teamwork and collaboration to reach successful end goals. She also supports the local Children’s Miracle Network of Southwest Virginia as a volunteer.

Angela holds a Bachelor of Science in Business Administration from Franklin University. She also completed courses in Design Thinking at Darden’s Executive Education at the University of Virginia.

We speak your language. Since 1953, the ValleyStar team has guided, educated and stood by its members to make banking and managing your finances as easy and convenient as possible. The credit union is $600 million in assets, serving cities and counties in Virginia and North Carolina. ValleyStar is a full-service financial institution that offers consumer and commercial products and services. Headquartered in Martinsville, Virginia, ValleyStar operates digital banking services and seven physical branch locations in Collinsville, Danville, Martinsville, Richmond, Roanoke, Rocky Mount and Waynesboro, Va. and a loan center in Fishersville, Va. For more information, visit valleystar.org. We’d love to speak with you.