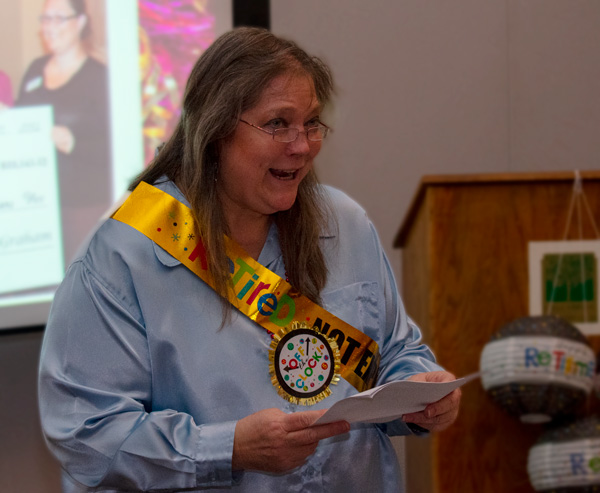 The Tidewater Chapter honored longtime volunteer and past Chapter president Leigh Ann Graham (of Beach Municipal Federal Credit Union) on Nov. 10 at a special meeting celebrating her leadership of the Chapter and her retirement next month from the credit union.

Graham's involvement with the Chapter began shortly after she joined Beach Municipal Federal Credit Union in 1999. A regular attendee at Chapter meetings, she was unexpectedly handed the role of Chapter treasurer in 2001. With the exception of a one-break in 2010 to serve as president of the Tidewater Mortgage Bankers Association, she has served in a leadership role for the Chapter ever since.

That includes an almost decade-long stint as Chapter President, during which she led the launch of the Chapter's charity golf tournament, which has raised more than $136,300 for Children's Hospital of the King's Daughters, the Norfolk-based Children's Miracle Network Hospital.

The Chapter has also awarded more than $180,000 in scholarships to high school seniors and college students during the past two decades. The scholarships are designed to help area credit union members pursue their educational dreams. To recognize her extraordinary service to the Chapter, the Chapter has renamed the scholarship program in her honor.

Graham is a recent recipient of the Eugene H. Farley Jr. Award of Excellence, one of the Virginia Credit Union League's highest individual honors. She was recognized for her service to the Tidewater Chapter -- and through the charity golf tournament and scholarship program -- the Greater Hampton Roads community.

Current Tidewater Chapter President Erica Carson praised Graham for her leadership, her mentorship and her ability to make others feel welcome.

"She's made a difference in so many lives, on both a personal and professional level," said Carson. "She leaves a remarkable legacy, one which we can build on as we continue her good work."