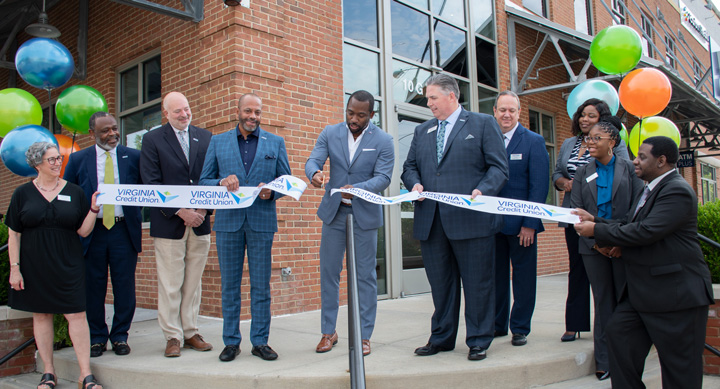 The Carytown Branch was opened to members on June 13. The ceremonial ribbon cutting brought the Mayor and several members of Virginia Credit Union’s Board of Directors and staff together to mark the occasion.

Ken Ampy, chairman of Virginia Credit Union’s volunteer Board of Directors, welcomed attendees by referencing the Carytown Branch and a future branch planned for Scott’s Addition. “These two branches represent our continued commitment to the City and its citizens,” said Ampy.

“I want to thank Virginia Credit Union and its 300,000 members for once again choosing Richmond,” Mayor Stoney said. “I love that you’re choosing Richmond [as the site of] new adaptations for smaller, more flexible branches for your members.

“Most important, let me thank you for the work you do in the education realm with financial literacy and financial access,” the Mayor said.

Located in a former Panera Bread, the Carytown Branch is smaller than the credit union’s other branches, but offers several enhanced services to members.

The Carytown Branch is staffed with financial success advisors who assist members with anything from simple transactions to applying for loans. Two ATM Plus machines offer enhanced features including the ability to make payments on cards and loans, transfer funds between accounts, and withdraw funds in exact amounts with bills other than twenties or tens.

The new branch is Virginia Credit Union’s 20th. In addition to the Richmond area, the credit union also has locations in Fredericksburg, Charlottesville and Farmville.