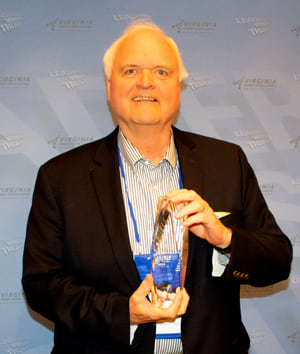 The James P. Kirsch Lifetime Achievement Award recognizes individuals who have devoted their time and talents to ensuring a brighter, better future for credit unions. It is named in honor of the late James P. “Jimmy” Kirsch, a longtime credit union volunteer whose passion for credit unions led him to leadership roles at the state, national and international levels.

“I feel blessed to have had a wonderful career that’s allowed me to be a part of so many peoples’ stories,” says Ball. “Working in credit unions, you have the opportunity to share in your members’ lives. You share in their heartaches, their joys, their needs and their wants. You become part of the family. That’s what I’ve always found so rewarding.”

Ball got his start in credit unions in 1979 after working for a Richmond-based savings and loan. One of the first S&Ls to convert from a mutual structure in which the customers “owned” the institution to a stockholder-owned model, Ball said he found the change in culture and the S&L’s new focus on profits disheartening.

“Everything changed. It was no longer about helping the customer; it was more about earning profits for the stockholders, including most of the bank officers,” says Ball.

He joined Chesterfield Federal Credit Union in 1979 as the general manager.

“It was back to my comfort level at Chesterfield; where the needs of the members were the focus,” says Ball. “I never lost sight of the fact that we’re here to serve our members. …[I]t should always be about how to best serve them.”

Throughout his career, Ball has made volunteer service a priority. For 20 years, he volunteered with the nonprofit Consumer Credit Counseling Service, now Clearpoint Financial Solutions. He says he appreciated the value and service the organization afforded consumers, providing assistance in managing debt, budgeting and personal finance basics. He also taught credit union courses at two Richmond-based community colleges for five years in the 1980s.

“That was quite an honor, having the opportunity to share the ‘Credit Union Difference’ while also introducing people to the basics of managing a credit union,” says Ball.

His service as a champion for the credit union industry didn’t end there, however. For decades, he served on various committees and task forces for the Virginia Credit Union League, the trade association that works to promote and protect the commonwealth’s credit unions.

“I was honored to help get credit unions through their ‘second generation,’ moving them from single sponsor fields-of-membership to multiple-common-bond and community memberships. That’s been a remarkable evolution,” says Ball. “I hope our up-and-coming leaders will always remember the importance of keeping credit unions unique, keeping them member-focused and ensuring they remain relevant. If we do those things, our members will continue to reap the rewards of the ‘Credit Union Difference.’”

About the Virginia Credit Union League

The Virginia Credit Union League is the state trade association for the Commonwealth’s not-for-profit, member-owned credit unions. Through leadership, vision and the trust of our credit unions, the League is ensuring the growth, success and diversity of Virginia’s credit unions. Learn more at vacul.org.