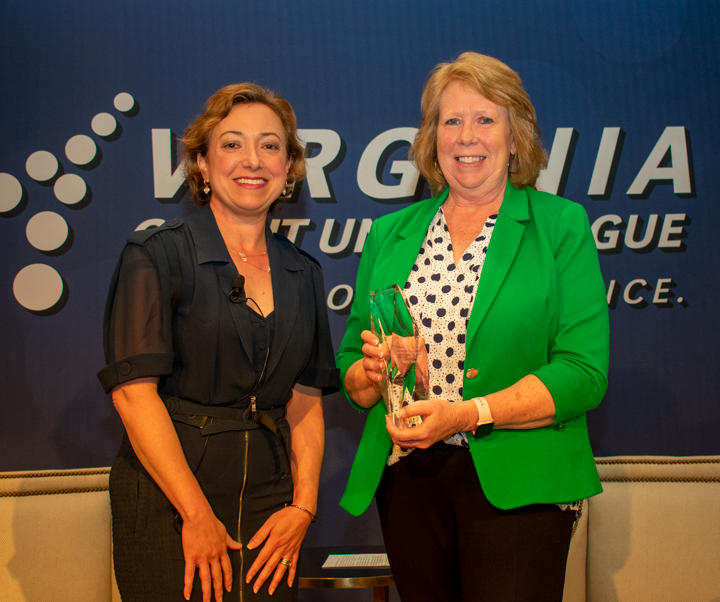 Presented by the Virginia Credit Union League, the trade association for the 108 Virginia-based credit unions, the Farley Award honors a credit union professional or volunteer official in recognition of his or her outstanding contributions to an individual credit union or to the credit union industry. In particular, the award seeks to recognize achievements that exemplify credit unions' 'People Helping People' philosophy. It is named in honor of the late-Eugene H. "Gene" Farley Jr., who led the League and served Virginia's credit unions for more than 40 years until his retirement in 1999.

"The moment I started working in a credit union in 2004, I knew I had found my passion,” says Smith. “I enjoy helping people improve their financial health, and the credit union philosophy of 'People Helping People' allowed me to do this."

Smith was honored for her leadership of the credit union and her service to Virginia's credit union system. Focused on its mission to provide the underserved, unbanked and no credit population with better, easier access to financial services and personal finance guidance, Peoples Advantage Federal Credit Union has been honored and recognized for several innovative services, including its Reliable Rides program, designed to help low-income individuals afford a dependable vehicle; a broad range of pandemic-related financial relief programs; a low-cost payday loan alternative; and Save to Win, a prize-based program designed to encourage credit union members to build savings.

“Patsy exemplifies true leadership,” said Virginia Credit Union League President/CEO Carrie Hunt. “She has a gift for identifying a need and marshalling the people and resources necessary to meet that need. She has spent the past 15 years helping those around her succeed and we’re proud to honor her work, leadership and vision.”

The $91 million Peoples Advantage also recently earned its Community Development Financial Institution certification, a designation of the U.S. Treasury Department, which aids qualified financial institutions in leveraging federal funds and private capital to meet the needs of underserved communities. Thanks to the CDFI designation, the credit union has won numerous grants to support their efforts to serve the underserved community.

A leader within the industry, she also served for nine years on the board of directors for the Virginia Credit Union League, most recently completing a three-year term in December 2021, just prior to her retirement from Peoples Advantage.

Passionate about small credit unions, she helped coordinate roundtables that offered small credit union leaders the opportunity to network, share best practices and resources, and educate themselves about operational and regulatory compliance issues.

In recent years, she was a driving force behind the formation of the Virginia Sister Society of the Global Women's Leadership Network. The Virginia Sister Society has been instrumental in creating platforms for small- and mid-sized credit unions to network and collaborate, and although participation is open to anyone, the group focused mostly on up-and-coming women leaders at Virginia's credit unions. Its education sessions regularly drew 100 participants.

Smith has also been a longtime supporter and active mentor for the Virginia Credit Union League's Emerging Professionals Network, a group of 500 next-generation credit union leaders.

"Throughout my career, I always looked for ways to empower and motivate other credit union professionals to reach their full potential and grow their careers,” says Smith. “Networking groups, such as the Virginia Sister Society, provided a forum to learn from colleagues and other professionals. No matter where I was in my career, I never stopped learning and listening. It was one of my keys to success."