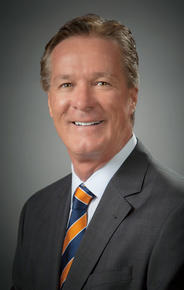 The Farley Award was presented on April 17, in Roanoke, Virginia, at the Virginia Credit Union League's 81st Annual Meeting.

The award is presented to a credit union professional or volunteer official in recognition of his or her outstanding contributions to an individual credit union or to the credit union movement. In particular, the award seeks to recognize achievements that exemplify credit unions’ ‘People Helping People’ philosophy. It is named in honor of retired Virginia Credit Union League President Gene Farley, who served the League and Virginia’s credit unions for more than 40 years until his retirement in 1999.

Burniske was recognized for the leadership of his $2 billion credit union, which serves almost 200,000 member-owners across the country, primarily in Virginia, Utah, Texas, Florida, North Carolina, and Rhode Island.

He was honored for his contributions to the credit union movement and the communities served by the family of credit unions, including his leadership in arguing against certain components of a proposed regulation that would have negatively impacted credit unions nationwide. That regulatory proposal has since been significantly revised.

"Ron has had a distinguished career with Chartway spanning more than 30 years, marked by the credit union's tremendous growth into one of the nation's largest credit unions and by the difference the credit union makes in the communities it serves," said Virginia Credit Union League President Rick Pillow. "Throughout his career, he also made volunteer service to the credit union system and community organizations a priority. That willingness to serve is the mark of a great leader."

Chartway's leadership in aiding credit unions affected by the Great Recession was also applauded by the Virginia Credit Union League's Board of Directors. In 2010, Chartway's financial strength and stability enabled it to merge with three Utah-based credit unions, ensuring members of those credit unions could continue to count on their credit union as their primary financial services provider at a time when other financial institutions were clamping down on lending.

“I am deeply honored and humbled to receive this award,” said Burniske. “I share this recognition with the board members, leaders, and employees who have worked tirelessly throughout my tenure to enrich the lives of those we serve – financially and philanthropically.”

In 2005, Burniske founded the We Promise Foundation, the charitable arm of Chartway and its family of credit unions. The Foundation has raised almost $7 million since its founding, including a record-breaking year in 2014 with $1 million raised to aid its charity partners.

The Foundation donates to a number of charitable, non-profit and community partners who share its mission to make dreams come true for children with life-threatening illnesses. Its partners include several chapters of the Make-A-Wish Foundation in communities where the credit union has a presence, the Roc Solid Foundation, EQUI-Kids, the Children’s Hospital of the King’s Daughters, Toby’s Dream Foundation, Rock-n-Jock Charities, The Matty Fund, St. Mary’s Home for Disabled Children, and Families of Autistic Children in Tidewater.

Chartway and the We Promise Foundation are the recipients of numerous state and national awards for their charitable work, including eight first-place Dora Maxwell Social Responsibility Community Service Awards and one first-place national award since 2000.

Burniske's service to the credit union system and the communities served by Chartway include volunteering as a board member for the Make-A-Wish Foundation (Texas Gulf Coast Region and Louisiana Chapter), participating as a director for the Economics Club of Hampton Roads, and serving as a board member of the World Affairs Council of Hampton Roads.