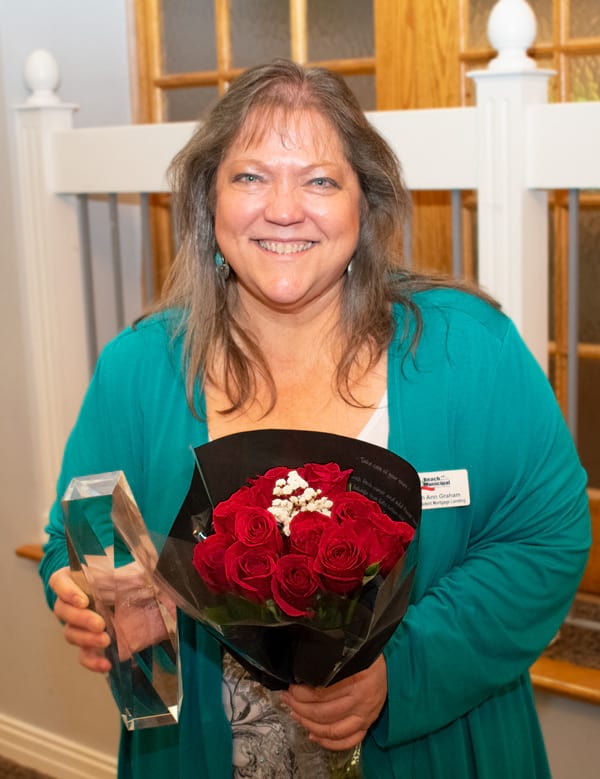 Leigh Ann Graham (pictured left) has been awarded the Virginia Credit Union League’s Eugene H. Farley Jr. Award of Excellence. Graham, Vice President of Mortgage Lending Services at Beach Municipal Federal Credit Union, was recognized for two decades of leadership and service, as a volunteer, to the League’s Tidewater Chapter, an organization of Greater Hampton Roads credit unions that provides education to member credit unions, coordinates legislative advocacy work, and organizes charitable events. Graham has served as president of the Tidewater Chapter for most of the past decade.

The Farley Award of Excellence recognizes an individual’s exceptional contributions to a credit union or to the credit union industry. In particular, the award seeks to recognize achievements that exemplify credit unions’ ‘People Helping People’ philosophy. It is named in honor of the late Gene Farley, who led the Virginia Credit Union League for 40 years.

“Leadership takes many forms, but there is something particularly noble about volunteers who are willing to pick up the mantle of leadership in service to others,” said League President/CEO Carrie Hunt. “Credit unions have a proud tradition of working together, in a spirit of cooperation, to strengthen, promote and advance our industry. Leigh Ann’s work at the Chapter level continues that proud tradition and the Commonwealth’s credit unions salute her for her service to the industry, her commitment to helping others and her dedication to building and maintaining a vibrant Tidewater Chapter.”

The Chapter’s many accomplishments during the past decade include an annual workshop that educated hundreds of credit union staff members and volunteer officials on regulatory issues, member service topics and risk management strategies.

Graham has also been a driving force behind the Chapter’s annual charity golf tournament, which this year celebrated its eighth event. To date, the golf tournament has raised more than $125,000 for Children’s Hospital of the King’s Daughters, the Norfolk-based Children’s Miracle Network Hospital.

Her involvement with the Chapter began shortly after she joined Beach Municipal Federal Credit Union in 1999. A regular attendee at Chapter meetings, she was unexpectedly handed the role of Chapter treasurer in 2001.

“Our mission was to help people and our credit unions,” said Graham. “It was wonderful to be a part of that. Even today, as much as the Chapter has evolved and as much as we’ve come to rely on digital and online resources, the Chapter still plays an important role in offering education and a forum to discuss issues and share our experiences.”

She continued to serve on the Chapter Board through 2009, taking a year off in 2010 to serve as president of the Tidewater Mortgage Bankers Association, another volunteer-led organization which she has served in various leadership roles. In 2011, she returned to the League’s Tidewater Chapter to serve as president, a role she’s filled since, with the exception of 2015.

“I think my involvement in the chapter stems from my being a person who enjoys helping others, and even more than that, seeing others succeed,” said Graham. “All these years I’ve seen that what we’re doing helps. Beyond that, I’m also blessed to have made so many wonderful friends through the Chapter, friendships that will last a lifetime.”