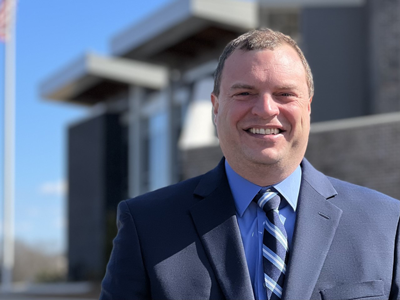 Martinsville, Virginia (March 18, 2022) – ValleyStar Credit Union announces Ben McBride as its senior vice president of IT. He joins the executive team, working alongside his colleagues to build innovative and secure member-focused service.

Ben began his career at ValleyStar Credit Union in 1999 (then known as the Martinsville DuPont Credit Union) as an IT specialist. Seizing opportunities as they arose brought Ben to his current role as SVP of IT. Ben and his team will be a driving force of AI, cybersecurity and ensuring ValleyStar is on the leading edge of breakthrough technologies.

“Our ValleyStar mission is ‘Employees First. Members Benefit.’ Ben is the perfect example of how our employees can build careers at ValleyStar while executing innovative ideas that benefit our members,” said Mike Warrell, CEO of ValleyStar Credit Union. “His expertise will advance ValleyStar and keep our credit union in front of emerging technologies to benefit the credit union team and all those that it serves.”

With more than 22 years in the credit union industry, Ben brings his deep-rooted financial industry knowledge to ValleyStar with a focus on advancing secure, cost-effective technology. His member-focused leadership translates into value for credit union members while keeping their financial assets safe. Ben holds a Bachelor of Science in Computer Science from Ferrum College.

We speak your language. Since 1953, the ValleyStar team has guided, educated and stood by its members to make banking and managing your finances as easy and convenient as possible. The credit union is $600 million in assets, serving cities and counties in Virginia and North Carolina. ValleyStar is a full-service financial
institution that offers consumer and commercial products and services.